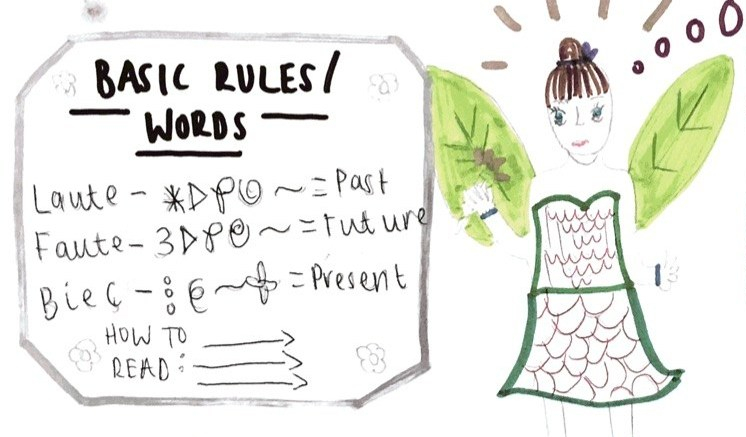 Last week was a busy week at Queen  Mary Linguistics.  Coppe van Urk and  I ran a week long summer school aimed at Year 10 students from schools in East and South London on Constructing a Language. We were brilliantly assisted by two student ambassadors (Dina and Sharika) who, although their degrees are in literature rather than linguistics, are clearly linguists at heart!  We spent about 20 hours with the students, and Sharika and Dina gave them a break from us and took them for lunch. The idea behind the summer school, which was funded as part of Queen Mary’s Widening Participation scheme, was to introduce some linguistics into the experience of school students.

In the summer school, we talked about sounds (phonetics), syllable structures (phonology), how words change for grammatical number and tense (morphology), and word order, agreement and case (syntax). We did this mainly through showing the students examples of invented languages (Tolkien’s Sindarin, Peterson‘s Dothraki, Okrand’s Klingon, my own Warig, Nolan‘s Parseltongue, and various others). Coppe and I had to do some quick fieldwork on these languages (using the internet as our consultant!) to get examples of the kinds of sounds and structures we were after. The very first day saw the students creating a cacophony of uvular stops, gargling on velars, and hissing out pharyngeal fricatives. One spooky, and somewhat spine-chilling, moment was the entire class, in chorus, eerily whispering Harry Potter’s Parseltongue injunction to the snake attacking Seumas:

During the ensuing five days, the students invented their own sound systems and syllable structures, their own morphological and syntactic rules. As well as giving them examples from Constructed Languages, we also snuck in examples of natural languages which did weird things (paucals, remote pasts, rare word orders, highly complex (polysynthetic)  word structures). Francis Nolan, Professor of Phonetics at Cambridge, and inventor of Parseltongue, gave us a special guest lecture on his experiences of creating the language for the Harry Potter films, and how he snuck a lot of interesting linguistics into it (we got to see Praat diagrams of a snake language!). In addition to all this, Daniel Harbour, another colleague at Queen Mary, did a special session on how writing systems develop, and the students came up with their own systems of writing for their languages.

The work that the students did was amazing. We had languages with only VC(C) syllable structures, including phonological rules to delete initial vowels under certain circumstances; writing systems designed to match the technology and history of the speakers (including ox-plough (boustrophedon) systems that zigzagged back and forth across the page); languages where word order varied depending on the gender of the speaker; partial infixed reduplication for paucal with full reduplication for plural; writing systems adapted to be maximally efficient in how to represent reduplication (the students loved reduplication!); circumfixal tense marking with incorporated directionals; independent tense markers appearing initially in verb-initial orders, and a whole ton of other, linguistically extremely cool, features. The most impressive aspect of this, for me at least, was just how creative and engaged the students were in taking quite abstract concepts and using them to invent their language.

For me, and for Coppe, the week was exhausting, but hugely worthwhile. I was really inspired to see what the students could do, and it made me realise more clearly than ever, that linguistics, often thought of as remote, abstract, and forbidding, can be a subject that school students can engage with. For your delectation, here are the posters that the students made for their languages. 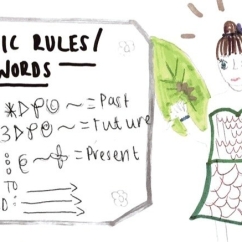 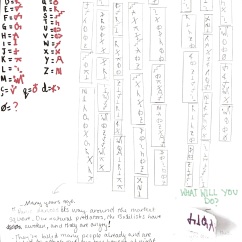 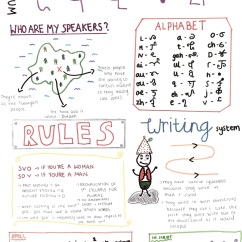 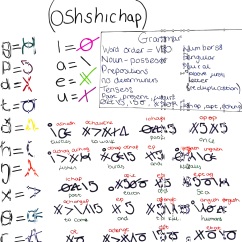 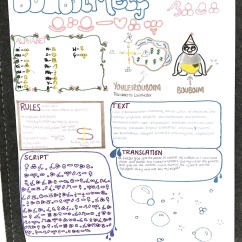 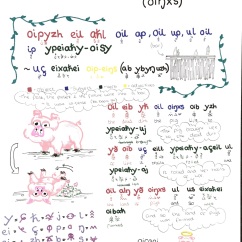 — This was written by David Adger and was reblogged from his personal website.